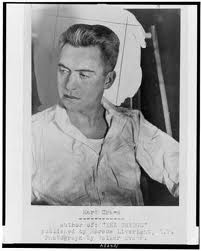 Harold (Hart) Crane was born July 21st 1899 in Garrettsville, Ohio. Crane was drawn into the emotional and psychological dramas of his parents which only intensified after their divorce. Despite these and personal issues, Crane was optimistic in his poetry. As was common for gay men of his time, Crane on occasion sought sexual encounters with sailors and other "trade". Crane committed suicide by jumping off a steam ship into the Gulf of Mexico, presumably after his advances toward a crew member were rejected. Consider Crane the successor to Walt Whitman.

Learn more about Crane at the Poetry Foundation and  American  Poems.
Posted by Joe at 6:42 AM