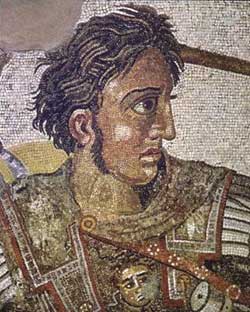 Alexander of Macedon was born on either July 20 or 21st in Pella. Alexander succeeded his father as King of Macedon in 336 BCE after Philip was assassinated. By his untimely death at age thirty, he had created one of the largest empires in the ancient world, ranging from the Adriatic Sea to the Indus River in India. Hephaestion is believed by many to have been Alexander's beloved.

Modern day labels of sexual orientation do not correspond to the types of sexual and personal relationships of ancient Greece, and their complexity is beyond my ability to describe in short.

Learn more at Wikipedia, Gay Art History and Gay Heroes.
Posted by Joe at 7:34 AM