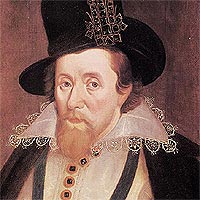 James, the future King of the Scots and then king of England and Ireland was born June 19th, 1566 in Edinburgh, Scotland. Yes, the same King James who commissioned an English translation of the Bible. James ascended the English throne after the death of Queen Elizabeth I. A popular saying at the time was Rex fuit Elizabeth, nunc est regina Jacobus (Elizabeth was King, now James is Queen).

Seventeenth century poet Théophile de Viau wrote about the king's relationship with George Villiers, the first Duke of Buckingham. His poem "Au marquis du Boukinquan" contains the lines: "Apollo with his songs / debauched young Hyacinthus, ... And it is well known that the king of England / fucks the Duke of Buckingham."

Read about King James and his personal relationships.