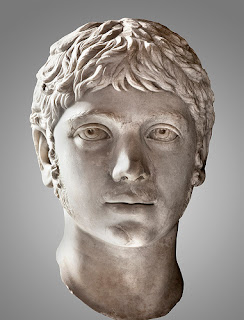 Varius Avitus Bassianus was born on March 8th, 204 CE in Hims(Homs, Greek - Emesa), Syria. His family was part of the Severan Dynasty that ruled Rome 193 to 235. In the early years of his youth he was the hereditary high priest of the god El-Gabal, or Ilāh hag-Gabal, a sun god. Thanks to the machinations of a maternal aunt, Bassianus became Emperor of Rom at the age of 14, and took the name Marcus Aurelius Antoninus. He brought the cult of El-Gaba with him, renaming the god Deus Sol Invictus and installed the cult over a debased Jupiter. Married numerous times he also infamous for sexual encounters with men. According to Cassius Dio's Roman History, Antoninus was fond of make up, excessively tweezing his hair, and reputedly offered a large sum of money to any physician that could give him female genitals. Also known as Heliogabalus, a Romanization of Ilāh hag-Gabal.

Read more at GLBTQ, Wikipedia and Amber Waves of Brain.
Posted by Joe at 7:25 AM