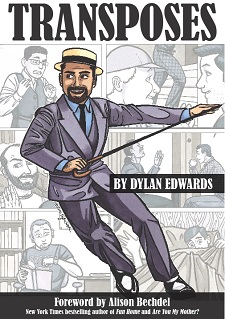 You  don't need me to tell you that there's been an explosion of bear culture and all things bear including a multitude of stories in different media to cater to them and those who love and worship them. It’s all well and good and I truly mean this, but at the same time I often wonder where are all the stories about men who aren’t bears or twinks.

An answer to this question came at Comic Con in 2010 when Dylan Edwards appeared at Prism’s booth to sign and sell copies of a preview edition of Transposes. As a preview I found it interesting, and not in the dismissive sense, but a bit difficult to comment on as it was a work in progress with one story and several pages character profiles. It was added to a stack of other LGBT comics and related material, moving up and down in order. I’d forgotten about it till months ago when I thought I saw a solicitation for it in Previews. Or did I imagine that? I suppose it’s bad form to confess having forgotten, but then it popped up again for certain in a recent Previews and the book will be here soon.

What is Transposes about if it isn't about bears or twinks? you ask. It's a collection of a half dozen stories based on experiences of men in another part of the LGBT community.To quote Edwards: "...to put it over clinically, [Transposes is] about queer-identified female-to-male transpeople, or QFMTS." Now please don't stop reading if you're cisgender -- meaning that you're for the most part comfortable with the gender on your birth certificate matching up with your own self-perceptions. Edwards is assuredly being clinical in his introductory explanation because really, these are stories about people making sense of their lives and finding happiness and peace by exploring and defining what it means to them to be happy in all ways with themselves. The men that Edwards interviewed are Cal, Henry, Adam, Blake, Avery, Aaron, and James though Edwards explains their names have been changed to protect their privacy because unfortunately trans people typically face far greater hurdles with regard to acceptance and have few legal rights. Unfortunately, legislation is incapable of making people like one another.

There's a great deal of humor in Cal's story as he recounts recent events of a hookup with a friend as they visit at an outdoor cafe. The comedy comes not at Cal's expense, but from finding himself in a situation he'd fantasized about but thought it would happen down the road. It's the kind of conversation that you hope happens in public so you can eavesdrop because it's a hell of a lot more interesting than most gossip overheard!

Henry's story is one of contrast, creatively embellished by Edwards within the setting of the "Natural Museum of Henry" to tell how Henry in childhood learned to categorize things, a habit which was carried through adolescense and early adulthood. The tendency to label is something Henry applied to life, whether it was accepting labels from peers or creating a list of gender and power neutral acts for a relationship, all of which was abruptly interrupted by revelatory sex. The dichotomy for Henry is that in contrast to all of the outward orderliness he creattes he finds that having his body in a state of transition works well.

Adam's is a story of not only a person in transition, but also of a relationship and the woman who helps Adam discover himself after living life according to social expectations. One hopes the people to come into one's life will be as friends or lovers, but rare is the person who is selfless to the degree of sacrificing a relationship out of love and respect. The method Edwards conveys all the talk about and gravity of gender issues without letting it weigh the story down is a nice touch.

Like Cal's sexual encounter that begins the book, bearish Blake has found a really hot guy. There's humor in an awkward moment, a very human moment, and while I will not spoil it for potential readers, I will say that neither the humor or the moment is at Blake's expense. However, Blake's encounter highlights embarrassment and anguish when the encounter has some personal and lasting consquences. In several panels Edwards effectively employs the use of oversized word balloons with minimal text to convey both emotion and a larger conversation. Edwards included an update following the stories and Blake has discovered how to make the best of the situation.

An uncle whose life is cut short from AIDS is the inspiration for Avery to live life on very personal terms that question standard assumptions about history, gender, and relationships. For me, this is a story of how an older generation can positively influence a younger one; how we can carry departed loved ones with us forward in our lives. Being a gay uncle living with HIV makes this part of Avery's life overshadow the rest of Avery's story and makes commenting further difficult for me.

The closing story about Aaron and James is narratively the most complex and lengthiest as it recounts the separate lives each of them led and how their journeys serendipitously intersected thanks to a woman in both their lives. Each account is rightly told in first person. To distinguish a change in the narrators for the reader Edwards introduces on the intro page two visual elements associated with either Aaron or James. Pay attention to this subtle detail to avoid confusion. A similar technique is also used to denote text boxes for each of the men. Learning how the relationship evolves from a friendship to one of a mentorship of sorts as James begins accepting his trans nature to mind blowingly sexual at a True Spirit Conference to wedded bliss and happy domesticity is beautiful and heartening.

Edwards confesses this is the sort of book he wishes he'd had. Kudos to him for seeing a need and believing in the idea strongly enough to follow through to its culmination Bravo to Adam, Cal, Henry, Avery, Blake, Aaron, and James for sharing their stories since this book wouldn' t exist without them. In relating these struggles and accomplishments Transposes will be a source of hope, inspiration, and encouragement to any one questioning their gender. It is my humble opinion that cisgendered readers will be able to find motivation from these stories to live life on their own terms. As for me, I was drawn into each story, wincing at the slights and mistreatment, admiring everyone's characteristic determination, and cheering their triumphs.

Transposes has a Faceook page. Want to check out a preview?
Posted by Joe at 1:00 AM