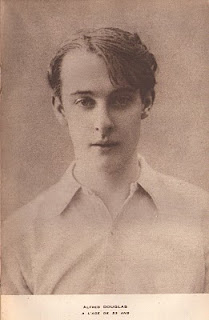 Alfred Bruce Douglas, the third son of John Douglas, the 9th Marquess of Queensbury, was born on October 22, 1870 in Worcestershire, England. Douglas, or Bosie as he was nicknamed, met Wilde in 1881. The two men began having an affair despite Wilde being married and with two sons. Bosie's father began to suspect there was more to his son's relationship with Wilde and would divorce his wife over Bosie's defiance at his orders. When rumors of a homosexual scandal surrounded the death of the eldest Douglas son, the Marquess went on the offensive against Wilde, setting into motion events that would lead to the infamous trial. Bosie and Wilde would reunite briefly after Wilde's prison sentence finished, but personal differences and pressures ended the affair.


Letters from Wilde to Douglas