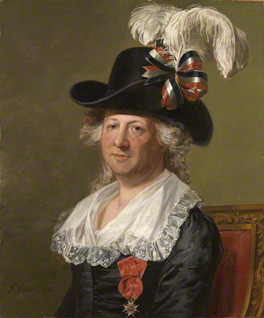 Charles Gemevieve Louise Auguste Andre Timothee d'Eon de Beaumont was born on October 7th, 1728 in Burgundy, France. D'Eon was born a biological male, and claimed later in life to be physically female though reared as male. D'Eon joined  Le Secret du Roi, King Louis XV's secret network of spies. Upon orders of the king, d'Eon went on a mission to Russia, complicated by the fact that at this time only women and children were allowed to cross into Russia. This was because England was monitoring Russian borders and England and France were attempting to sway Russia to each country's favors. So d'Eon did what seemed daring for other spies and yet necessary: dress and live as a woman, taking the name Lady Lea de Beaumont. To be discovered would mean death, and d'Eon certainly had a long life. A year after returning to France in 1761, d'Eon became a dragoon, or mounted infantry, captain, and in 1763 became an interim ambassador to England, a position he used to spy for King Louis. D'Eon disobeyed orders to return to France and caused a problem for the King. Years later, King Louis XV's son ordered d'Eon to wear women's clothing full time, an order that was easy to comply with as money was given by the King to fund the new wardrobe. D'eon petitioned the King to join French troops aiding the colonial rebels in America but was refused. The last twenty five years of d'Eon's life were difficult and ended in poverty.

Email ThisBlogThis!Share to TwitterShare to FacebookShare to Pinterest
Labels: transgender