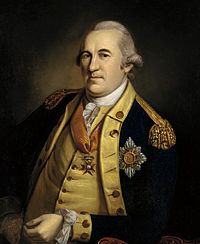 Baron Von Steuben was born September 17th, 1730 in Magdeburg, Duchy of Magdeburg, in what is today Germany. Steuben's father, Lieutenant Wilhelm von Steuben, was a military engineer, and Elizabeth von Jagvodin was his mother. The Von Steuben family spent some time in Russia after his father was assigned to assist Czarina Anna. Friedrich served one year as a volunteer for his father during the War of Austrian  Succession in 1744. By the age of 16 Steuben was an officer in the Prussian military.

Von Steuben would have continued his military career in Europe if rumors of improper sexual behavior with young boys had not surfaced. Anticpated commissions from Austria, Baden and France did not materialize due to the persistence of the rumors. The French Minister of War recommended Von Steuben to Ben Franklin, whose orders not to accept officers who did not speak English made Franklin initially reject the man. Upon further consideration, Franklin offered free passage to Von Steuben and letters of introduction wtih the understanding that he was a volunteer without rank or pay. The Baron joined George Washington and the Continental Army on February 23rd and less than a month later Washington had asked him to design a training program and to serve as inspector general.

After the war, Washington awarded a house at Valley Forge to Von Steuben, which he shared with his aide-de-camps Captain William North and General Benjamin Walker. Von Steuben left his entire estate to the two men.

Read more at the Bilerico Project.