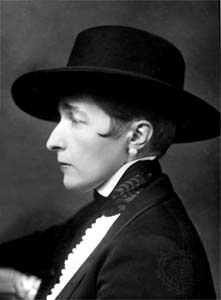 Maguerite Radclyffe Hall, or John as she preferred to be called, was born August 12th, 1880 in Bournemouth, Hampshire, England, whose father left her mother before she was even born. Thankfully, at age 21 she inherited an enormous fortune from her paternal grandfather which allowed her the  means to do whatever she wanted. Part of what she wwanted was beautiful women, inclulding Lady Una Troubridge and Evgguenia Souline. In her forties Hall became recognizable by her closely cut hair, tailored jackets, flamboyant tops, wide-brimmed hats, and ties. Hall is best remembered for her novel, The Well of Loneliness, and its undisguised lesbian characters and themes.

Learn more about Radclyffe Hall at GLBTQ.
Posted by Joe at 1:30 AM