Yes, Rich Johnston was right once again! DC has confirmed Bleeding Cool's speculation that its newly reintroduced character will be Alan Scott, the original Green Lantern, not exactly the same superhero as seen in 2011's Green Lantern movie, who'll be one of the central characters of James Robinson's Earth Two series. Robinson has interview with up now with Comic Book Resources so click over and read it in full. Rich Johnston compiled a list of other media with articles, which I've nicked below. The Advocate interview hints at another gay character to come down the line. The Washington Post has a four page preview.

James Robinson: "With that in mind, the only thing I was sad about in terms of a younger Justice League was that there wasn't going to be Jade and Obsidian – Obsidian of course being Alan Scott's gay son. And just as one idea can foster the next, from there I went, "Why don't I just make Alan Scott gay?" And to Dan Didio's credit, there wasn't a moments hesitation on that. He just said, "That's a great idea," and we went with it."

The DC Comics post teases that "a traumatic event will serve as the catalyst for him assuming his superhero identity as The Green Lantern." No, I don't think Sam, Alan's boyfriend, will become a "stuffed in a refrigerator" victim whose senseless death as the catalyst. I suspect the train Sam talks about traveling on to travel to the lodge Sam has booked as a surprise for Alan will derail. It would dovetail into Green Lantern's original Golden Age origin: "By 1940, after having already fulfilled the first two-thirds of this prophecy (death when it crashed, life when it healed the insanity of the person who found it), the flame had been fashioned into a metal lantern, which fell into the hands of Alan Scott, a young railroad engineer. Following a railroad bridge collapse, the flame instructs Scott in how to fashion a ring from its metal, to give him fantastic powers as the superhero Green Lantern." See Wikipedia. 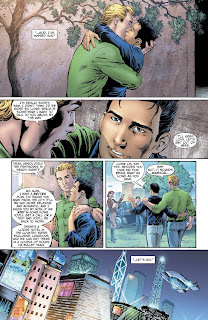 Email ThisBlogThis!Share to TwitterShare to FacebookShare to Pinterest
Labels: gay