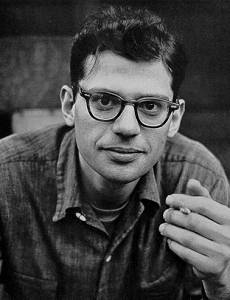 Allen Ginsburg was born une 3rd, 1926 in Paterson, NJ. Ginsburg's father, himself a modestly successful poet, recites poems to his two sons and Allen begins to write down his thoughts of life in 1937. One of the prominent figures of the Beat generation, Ginsburg is most well known for his poem Howl which contained images of gay sex. Obscenity charges were brought against Ginsburg's publisher for its inclusion of the poem. An important victory for free speech was won when the judge ruled in favor of the publisher and stated the Howl had "redeeming social importance".

Learn more about Ginsburg at allenginsburg.orghttp://www.allenginsberg.org/