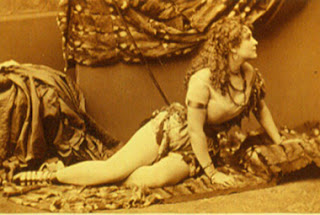 Adah was born as Adelaide McCord on June 15th, 1835 in Memphis. TN . Her numerous marriages makes her inclusion somewhat tenuous, but she is alluded to have had attachments to women. Menken's insistence on smoking in public and cross dressing sets her apart from most women of her time. She was most well known in her time for her role in the stage play Mazeppa, in which she rode standing on horseback while appearing to be naked thanks to nude tights. Menken's desire to achieve fame and recognition for her poetry was only modestly realized. In a piece written for the New York Sunday Mercury, Menken raved about Walt Whitman's Leaves of Grass, saying the poet was "centuries ahead of his contemporaries".

Email ThisBlogThis!Share to TwitterShare to FacebookShare to Pinterest
Labels: actor