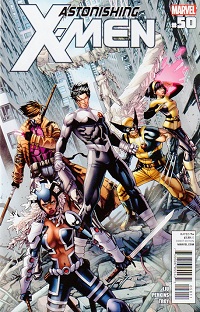 By now the news of an impending gay marriage in the pages of a superhero comic has made its way around the world. You may have seen Whoopi Goldberg talk about it Tuesday morning on The View.  Marvel Comics Astonishing X-Men #50, shows Northstar, established as gay since 1992, proposing to his boyfriend Kyle Jinadu.

What of the story though? Liu spends time advancing a standard fare plot in the aftermath of the Marauders attack on Wolverine's X-Men band. Standard is not intended to be an insult. Hero and villain dustups are de rigueur, just as abandoned warehouses, spies and mysterious organizations, and mind control are. I'm sure there will be some twists and turns in this area before the story's finish. My exposure to Liu's writing before her start on this series is minimal, because in all honesty, I detest Daken. However, Liu impressed me with her comments about Daken when she appeared as a panelist a couple years ago on Andy Mangels' Gays In Comcs at Comic-Con. I had no doubt she thoroughly enjoyed writing the manipulative, amoral, omnisexual Daken. She seems to be equally enjoying the various characters here, but not surprisingly, the bulk of her pleasure so far is with Northstar and Kyle separately and as a couple.

And that's what you're interested in right now, isn't it? Sure, there's a good scene with Wolverine, Natasha Romanov out of her Black Widow togs, and War Bird, who I can't figure out why she's in this cast. There is some amusing dialog between Natasha and Logan and from and about War Bird. I have a similar dislike for Logan, and it's certainly fun to see him sipping from a dainty tea cup. Likewise Iceman (and Gambit) giving Jean-Paul relationship advice in light of Chuck Austen's unfortunate decision some years ago to write Jean-Paul with an unrequitable crush on Bobby. Gambit: "[Kyle] probably doesn't feel like a priority in your life." Bobby (in response to Northstar asking what he should do): "I dunno. Keep it simple -- Get him something nice. Make him feel special." How Jean-Paul makes the leap in his mind from "get something nice" and "make him feel special" to marriage proposal.

The next we see the guys it's a glorious day in Bryant Park, except Kyle is having a frustrating time trying to deal with the near impossibility of getting their apartment equipped with wi fi so he can do his job managing Northstar's imaging and merchandise brand. Funny, I'd forgotten that bit. And from out of nowhere (well, it would've been out of nowhere if this hadn't been teased since March), Jean-Paul - nervous to the point he looks like he could hurl yet managing a sheepish smile - pops the question on bended knee to Kyle. It's meant to be incredibly romantic and it is, but Kyle shocked! You can see it right there on his face! There's no mistaking the way Perkins drew it. If only Jean-Paul's motivation had been right. Surprise, Kyle saw right through it! You should've just talked to him and not your teammates! And now there's anguish and tears and walking away and then there's Northstar flying around a bucolic countryside feeling sorry for himself so badly. Poor thing accidentally knocks some sense into his own head. Will it be too late though? Much to Northstar's horror, Kyle has been put in danger by a mystery villain for that mysterious organization alluded to in the second paragraph. Will he make it through the gauntlet of his mind-controlled teammates in order to save Kyle. Well, sure, because next month we have a wedding! How Liu and Perkins will do it is what counts!

Northstar hasn't been a character I cared much for, even in the early days of the initial Alpha Flight series. At the time if I had wanted arrogant I could have visited my father. Now the Ultimate Northstar was a different matter, but that poor sap is dead. My chilliness regular Northstar began to warm when Matt Fraction put him in Uncanny X-Men #508 where we first saw Kyle and I liked how Greg Pak and Fred Van Lente wrote him in the last Alpha Flight. Progress was made from a conceited ass to, well, much less a conceited ass and a sense of mutual love was evident. That's something I thought I'd never see in Northstar, let alone having an on panel boyfriend. Now in the space of three issues Liu has advanced Northstar, and Kyle by extension, so quickly it feels almost as if she's the one with super speed pushing him along. I'm happy she's doing it, ecstatic that a writer is putting a character through emotional growth - even though I have to remind myself that this vulnerable Northstar is the same character I once didn't much like. To complain about the rapid pace Liu is subjecting Northstar is almost baseless, isn't it? I've become so inured to super decompression with plots and such.

For many fans this pace and the proposal and marriage may be problematic. Not every gay or lesbian person I've talked to over the years is in favor of gay marriage, simply because from a belief that we shouldn't have to ape heterosexuals in order to have validation. You ask me - and I know you haven't - I'm in favor of marriage equality. It seemed like an impossible dream growing up in a small town nearly in the center of Illinois. Gays and lesbians should at least have the legal capacity to marry if they choose. And there will be those fans and non readers who will wail and gnash their teeth at this direction regardless. God bless their little hearts. I'm going to take Liu, Alonso, et al at there word that their motivations for doing this is genuine because I want to believe that the comics industry is truly beginning to appreciate its too long neglected LGBT readership.
Posted by Joe at 7:51 AM