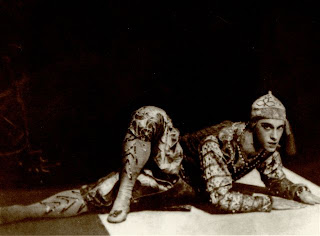 Vaslav Nijinksy was born on March 12th, 1980 in Kiev, Russia to Polish parents. One of the most talented male dancers in history, Nijinsky begn studying dance when he was admitted to the Imperial Ballet School at age 10. Upom watching  Nijinsky, Jean Cocteau wrote of: "the contrast between the Nijinksy of Le Spectre De La Rose bowing and smiling to the thunderous cheers as he took his fifty curtain calls, and the poor athlete backstage between bows, gasping and leaning against any support he could find, half fainting, clutching his side, being given his shower and rubdown by his attendant and the rest of us. On one side he was a marvel of grace; on the other, an extraordinary example of strength and weakness..."

Read more about Nijinsky at Russian Ballet History and Gay For Today.
Posted by Joe at 5:06 AM