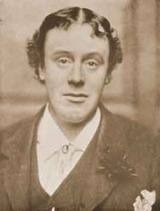 Eric Stanislaus Stenbock was born on march 14th, 1860 in Estonia. Stenbock's father died when he was one year old and his inherited properties were held in trust by his paternal grandfather Magnus. A few years later his maternal grandfather died, also leaving a considerable trust. Stenbock attended but never graduated from Balliol College at Oxford, coming under the influence of artist Simeon Solomon. Upon Magnus' death he inherited the title of Count and the family estate in Estonia, to which he traveled to for a year and a half, though England remained his home, where he wrote macabre fiction and poetry. In his social circle, Stenbock was the only man who could out do Oscar Wilde.

Read more at Gay For Today and Wikipedia.
Posted by Joe at 8:20 AM