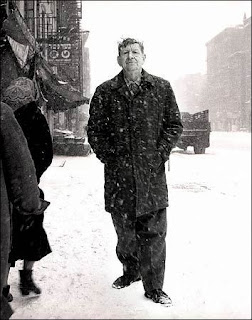 Stephen Harold Spender was born on February 28th in the Kensington district of London. Spender is considered part of the English Trinity due to his association with Christopher Isherwood and W H Auden. Spender fell in love with Tony Hyndman in 1933 and they lived together from 1935 to 1936, though he had an affair with Muriel Gardiner in 1934. In a letter written to Isherwood in 1935, Spender confided: "I find boys much more attractive, in fact I am rather more than usually susceptible, but actually I find the actual sexual act with women more satisfactory, more terrible, more disgusting, and, in fact, more everything." During his second marriage to a woman named Natasha Litvin, Spender began replacing references to loving men in his work with ambiguous phrases.

Read more at Band of Thebes and at Wikipedia.
Posted by Joe at 8:44 AM