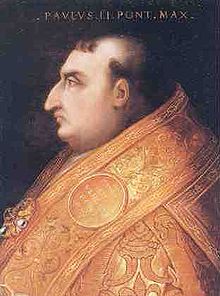 Pope Paul II was born Pietro Barbo in the city of Venice in 1417. Rather than follow in the footsteps of his father and become a merchant (at this time Venice was was its own country, made wealthy from trading), Barbo chose to enter the church after his uncle was elected Pope. He allegedly died of a stroke while having sex with a young male page. One of his successors derogatorily suggested calling him Maria Pietissima (Our Lady of Pity) because he often broke down and cried in times of crisis.

Read more about Pope Paul II at One Evil or Queer History or Wikipedia.
Posted by Joe at 6:28 AM